Bijoux Concept: The story of a brilliant alliance

Excellence in jewellery design and mastery of 3D technologies, the story of the Bijoux Concept atelier

A jewellery workshop was the childhood dream of Susanne, CEO, and THE jewellery side of the duo behind Bijoux Concept. François, for you, it is technical mastery, you are the Artistic Director.

Together, you represent the two faces of the company “Bijoux Concept”.

That dream became a reality in 1997, in the heart of the quiet town of Neuchâtel in Switzerland, a town imbued with the traditions and know-how of the luxury sector. As the years passed, the workshop existed and evolved in a context of Baroque contemporary lines amidst a mix of traditional tools and 3D technologies.

It was against this backdrop that Susanne and François conceived of their “Noir-à-porter” jewellery line in 2008.

Bijoux Concept is the fruit of this mix of complementary talents and experiences.

Today, the atelier’s output is known across Switzerland for its excellence and creativity, among a private clientele (via the boutique) as well as numerous jewellery design workshops.

“Experience is like a lantern that casts light behind one,” one Afghan proverb tells us. So let us go back to the past experience that each one of you brings to the enterprise. Can you remind us what you early professional training was?

Ever since I was a child, I have always been attracted by drawing and manual work. Being a fan of jewels and precious stones, I trained in jewellery-making at Chaux-de-Fonds, in a watchmaking workshop. Sawing, filing, beating, drawing… for me, they represent the freedom of shapes…

François:
My initial training was in mechanics and then technical drawing. My initial occupation was as a mechanical engineer working on tool machinery in the canton of Neuchâtel, the stronghold of watchmaking since the 70s.

You were one of the trailblazers in Switzerland in the move towards 3D technologies, and in particular a 3D software specially developed for jewellery design. Can you explain the reasons for that, and the context at the time?

Having been keen on drawing since childhood, I was really enthusiastic about the arrival of 3D tools. A whole world opened up to me, the desire to create shapes virtually and see them in three dimensions on the screen. At the same time, the machine industry and the watchmaking industry was also embracing this technology for manufacturing watches. both Susanne and I were more inclined towards designing jewellery pieces in 3D. At the time, my tools were intended for mechanical work, it was quite rigid. We were looking for a more creative and evolutive solution. That’s when we came across 3DESIGN.

Susanne:
Contrary to what a lot of people think, jewellery-making is a highly technical trade, and “joaillerie” – the haute couture of jewellery-making – even more so. To secure a stone in its setting, you have to know the material and respect the dimensions…
Today, knowing your trade plus being in control of the precision of the 3D tool… is to have chance on your side! At Bijoux Concept, we play the card of complementarity with François.

Before, I used to design projects in one single piece by hand, in wax or brass (a time-consuming task), which always carried the risk of making a mistake and having to start again. Now, some elements are made by hand, others are executed in 3D, depending on their complexity and shape. First, 3D has offered me the convenience of previewing the finished jewellery item, as well as speed and precision in making the prototype or the piece itself. One of the great advantages for me has been being able to break it down into several parts and then put everything together at the end. I have been able to do more with pieces than I would have done by hand. Finally, 3D is ideal for presenting the end-customer with pictures and even a resin prototype of their future jewellery item. Customers are blown away by it! And that helps us to get a project validated.

To my mind, 3D does not replace the artisan, but supplements him or her. The final stroke of finesse by the master craftsman will always be necessary, in fact.

Even then, towards the end of the 90s, a number of 3D solutions were already available on the market, including free 3D programmes, downloadable online. Yet you chose 3DESIGN, a paid-for solution. Why?

3DESIGN is the only parametric design software, ideal for applying any change at every design stage, unlike the Rhinoceros programme!
Also, at the time it was the only jewellery-orientated programme, and on MAC too!
As a mechanical engineer, I used to work on AutoCAD and Inventor. For jewellery design, I wanted that parameter-based aspect of mechanical design software, plus the freedom of shapes to construct, instinct, creativity. Of course, Rhino was virtually free but I wanted a professional solution. 3DESIGN met my needs in terms of budget and use. I was satisfied.
The Bijoux Concept Boutique in Neuchâtel

Could you describe an example of jewellery design that illustrates your work, your tools?

Here, for example, are the stages of development of one of our most recent projects: the ring in the ROSE line. 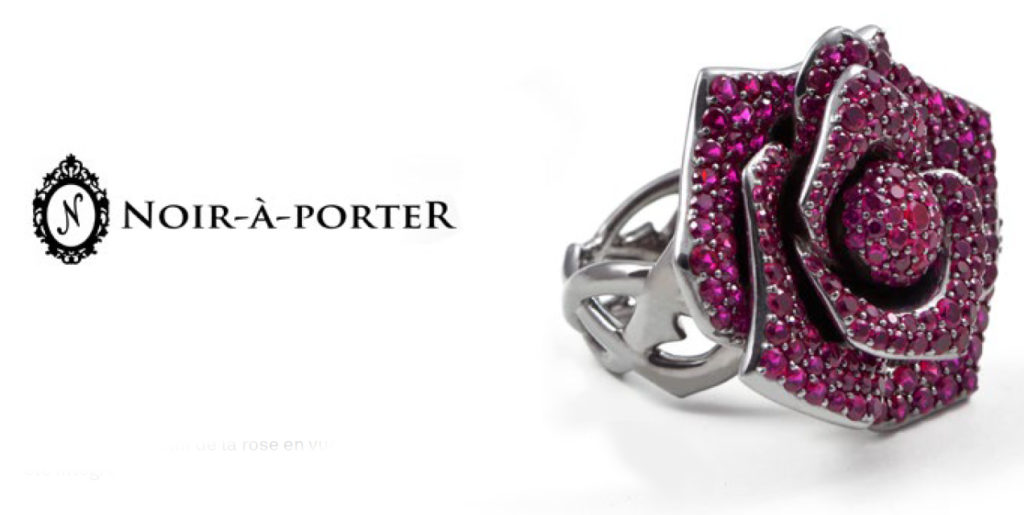 Initial step: Hand-drawing of the rose, in plan view. This drawing was then integrated into 3DESIGN. It is a flat view; so next we have to create the volume.

Over more than 12 years, you have seen your software evolve. In your experience, what would you say were the main advantage of 3DESIGN?

Do you have a wishlist for future versions of 3DESIGN?

After 12 years of practice, I can say in all modesty that I have mastered every function, even the most advanced, and I would like to move on to the “development” stage, that is to say, be able to set all the parameters myself.
The intuitive and automatic functions helped me to get started at the beginning. Today, I no longer use the “stone
tool”, the “signet tool” or the “sovereign function”; the software enables me to design everything myself. And I’d like to be able to go further with possibilities for manual parameter setting!

Do you have a tip for new users of 3DESIGN?

My advice to people starting off with 3DESIGN would be to automatically do the training. You don’t buy a car without passing your driving test!
A fine example of the 3Design software in use. We are proud and delighted to have been able to contribute to the development and creativity of their users. We thank Susanne and François for their time and their spontaneity.

This interview was given on Monday 9 September 2019, in the lounge of the Hôtel Métropole in Lyon (France).
Interview conducted by Mrs Emilie Balsamo, Team 3DESIGN, Gravotech Group, with Mrs Susanne Dändliker and Mr François Righi – Bijoux Concept – www.bijoux-concept.com (Neuchâtel, Switzerland).